The history
of Straand!

Ever since 1864, our hotel has provided well-being and good service with the guest in the center.

The history of Straand Hotel

Ever since the first shuttles arrived at Straand in 1864, our hotel has ensured well-being and good service with the guest in focus. The hospitality and the good traditions have been passed on from generation to generation, and over 150 years later you can still feel at home when you are here. You will find a very special atmosphere in the old part, which lives on as a central part of the new hotel. If the solid timber walls in the pleasant living rooms could talk, they would have a lot to tell about life and business in the past. Straand has an interesting and colorful past that today's 5th generation hosts, Katrine & Lars Arne Straand, are both proud of and feel obliged to carry on.

We need five generations and 157 years back in time - to 1864 - to find the basis for today's extensive business on Straand. Then Lars Arne's great-great-grandfather, Olav and his wife Kari, bought the upper and lower Straand. What the two took over was for a homestead to count, with a modest living room and a patch of land with lots of rocks and bushes. The location, on the other hand, was beautiful on the slopes down to Lake Nisser. 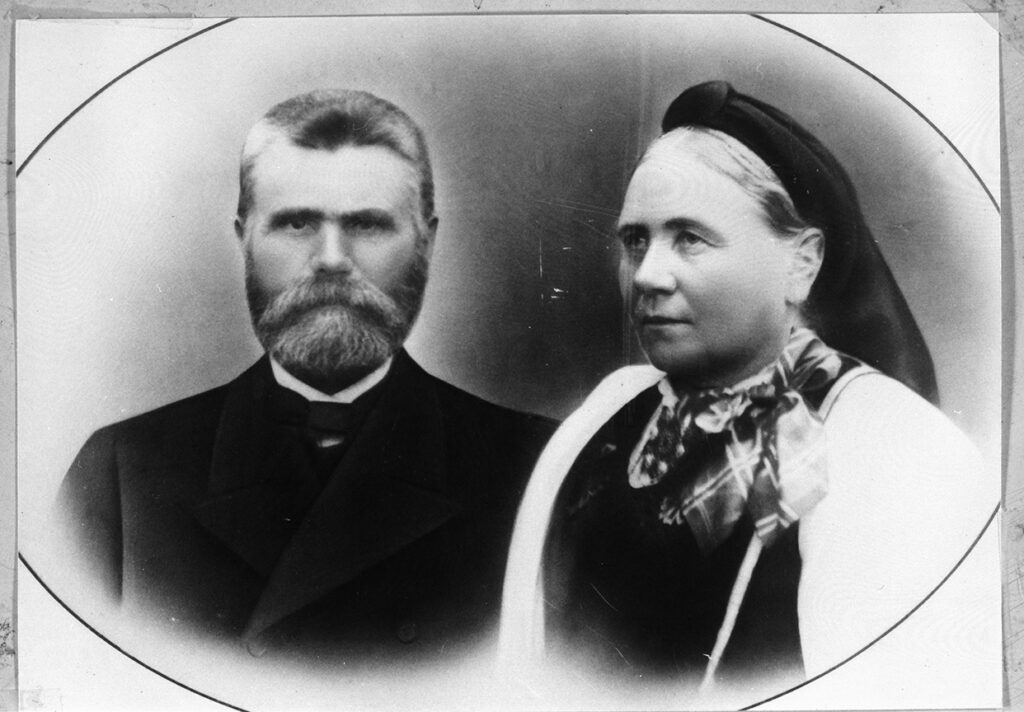 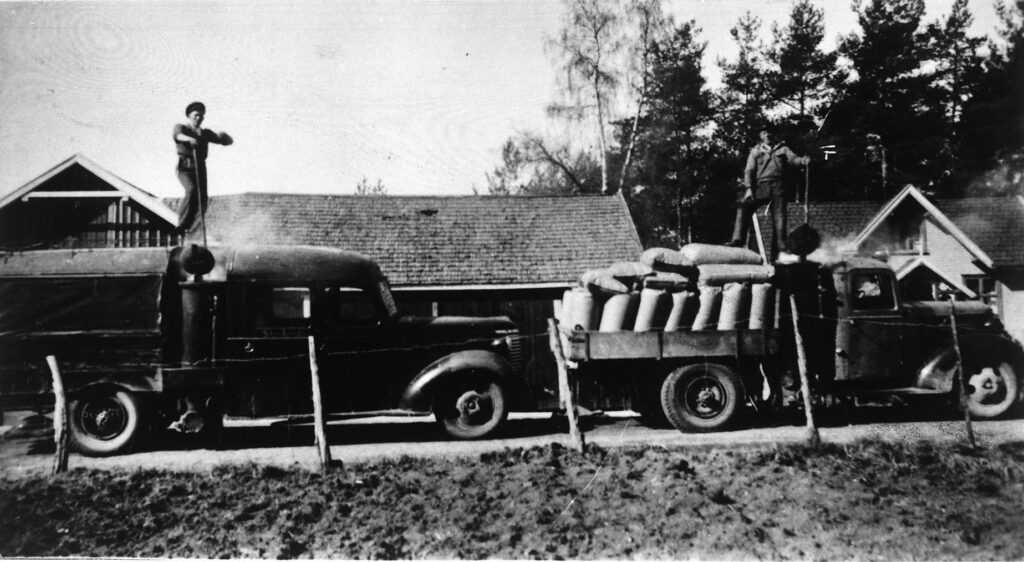 Olav and Kari were a very hard-working couple, who with young courage saw future opportunities also from the conditions of the time. In addition to clearing the space for a model farm, Olav took over the bus station in Vrådal. With this, Straand quickly became an important center for all kinds of transport and much of what else happened in the village. Although tourism in the 19th century had not yet reached this part of Telemark, Vrådal was an important hub for road users.

"The environment on Straand they built up to a concept that has been followed up by those who came after - until today".

At Kari and Olav on Straand, everyone was well received, although the space must be said to have been extremely modest in the first shuttle station, which by the way is still to be found in the hotel area. This consisted of a kitchen and living room on the ground floor, as well as a shed or loft above this again. The overnight guests were placed in the living room, the hosts slept in the kitchen, while those who were in the service of Olav and Kari had their place on the tree in the first years. When there were many people on the move; it could be agents, magistrates and other "authorities", it goes without saying that from time to time it could be quite cramped about bliss.
However, travelers preferred to be cramped on Straand rather than find another home. An important reason was that Kari and Olav had already created their own well-being on the site. In addition, Kari was widely known for her good food, and the coffee at Straand was almost famous at the time. 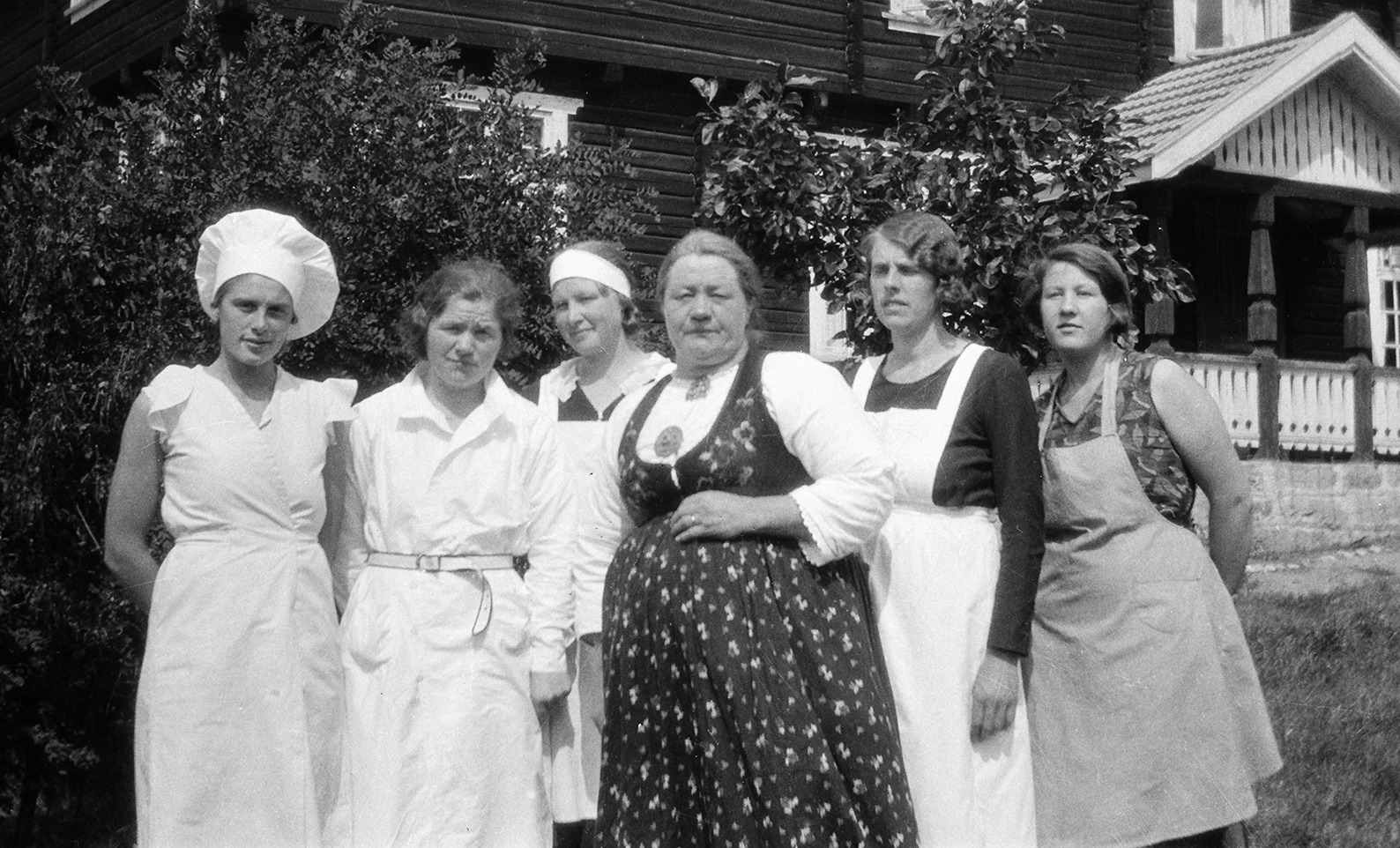 In the years leading up to the turn of the century, Straand was constantly growing. New buildings were erected and in the stables there could be up to 15-16 horses in the game ropes. In addition to being Vrådal's only hotel for many years, the place gradually gained other important functions. These were "doctor's days" for the people of the village, and here "scribe, fut and the people for things" met when it was relevant.
Kari and Olav laid the foundation for a business where the focus was always on new opportunities. In this way they left a rich legacy to subsequent generations. The environment on Straand they built up to a concept that has been followed up by those who came after - until today

Kari and Olav's son, Johan, became the next generation at the bus station. He took over the place from his parents in 1902. His wife, Sigrid, had experience from other boarding house operations, and with that came new momentum in hotel operations. It was in Sigrid and Johan's time that the holiday guests began to show up in earnest, and then naturally first and foremost in the summer. 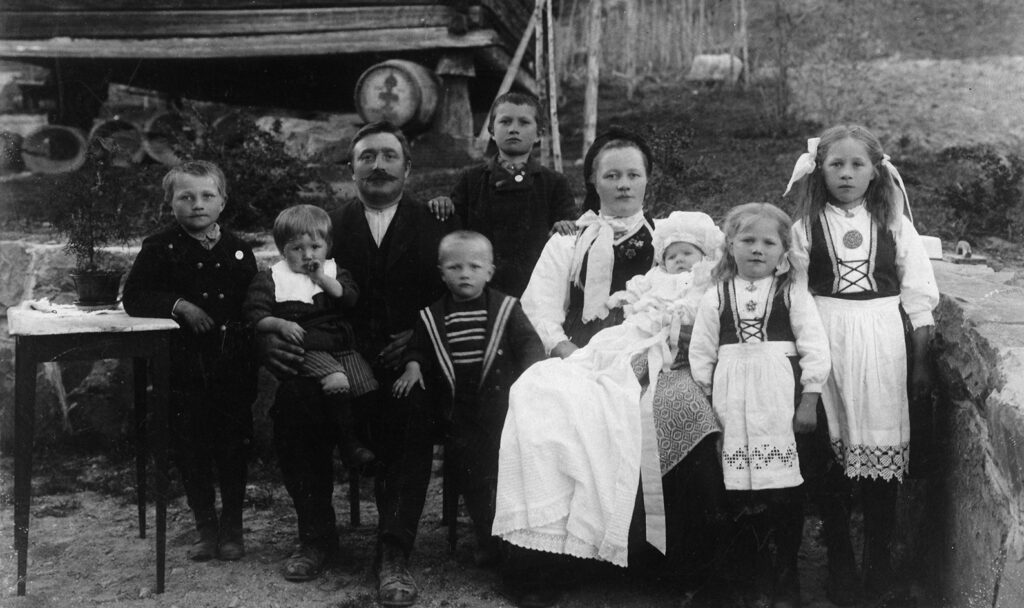 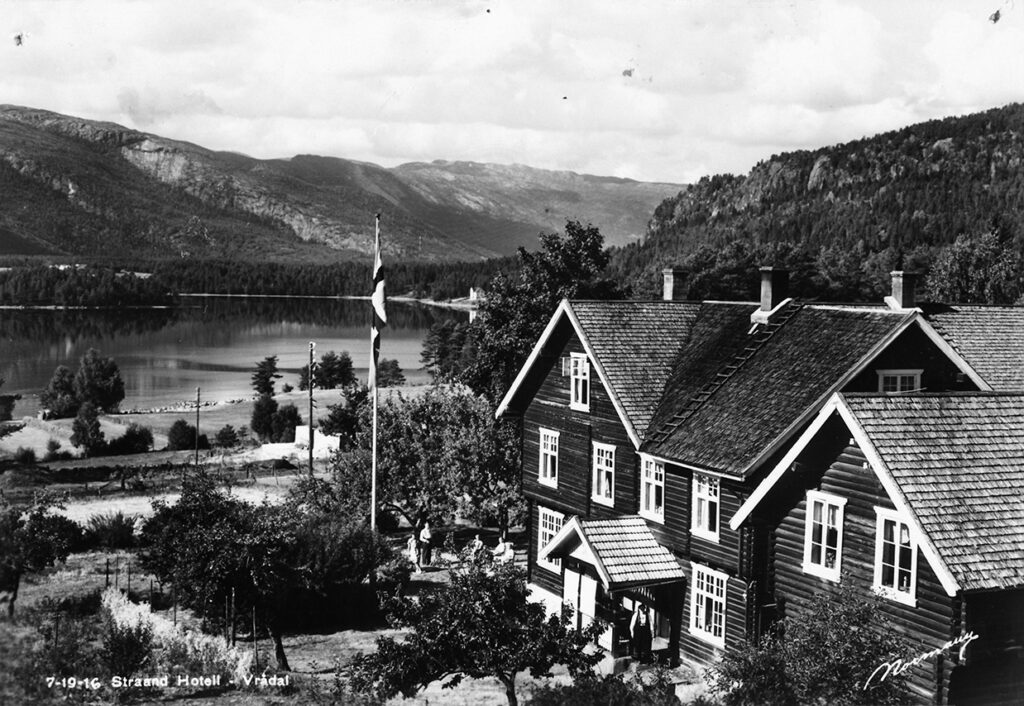 In 1924, Straand was shaken by a small disaster. Then the hotel, which was built in Swiss style, burned to the ground. As the energetic man Johan was, however, he immediately began to build new. And already the following year, for Christmas, the new storehouse-style hotel was ready for use.
With its solid timber walls and traditional Telemark style, this is still a central part of today's large modern hotel on Straand. Together with Sigrid, he carried on the legacy of the best Straand traditions. He quickly started with the development of the hotel, which now had five rooms and two living rooms on the ground floor, and ten rooms on the floor above.

To an even greater extent than his father, Johan had a lot of iron in the fire. In addition to running a shuttle station and logging, he did a lot of trading and acquired several larger properties. As a bus station owner, he experienced the new era, and in 1919 he and 2 relatives bought the first car in Vrådal. He saw very well that it was only a matter of time before the car would dominate both passenger and freight transport. In 1929, he therefore acquired the first truck, and also provided a route license in the area. Later he established a fixed route between Vrådal and Skien. This part of his and his family's business was developed into "Straand Bilruter". With what has happened of mergers in the transport area in recent years, this Straand commitment is now part of Telemark Bilruter. 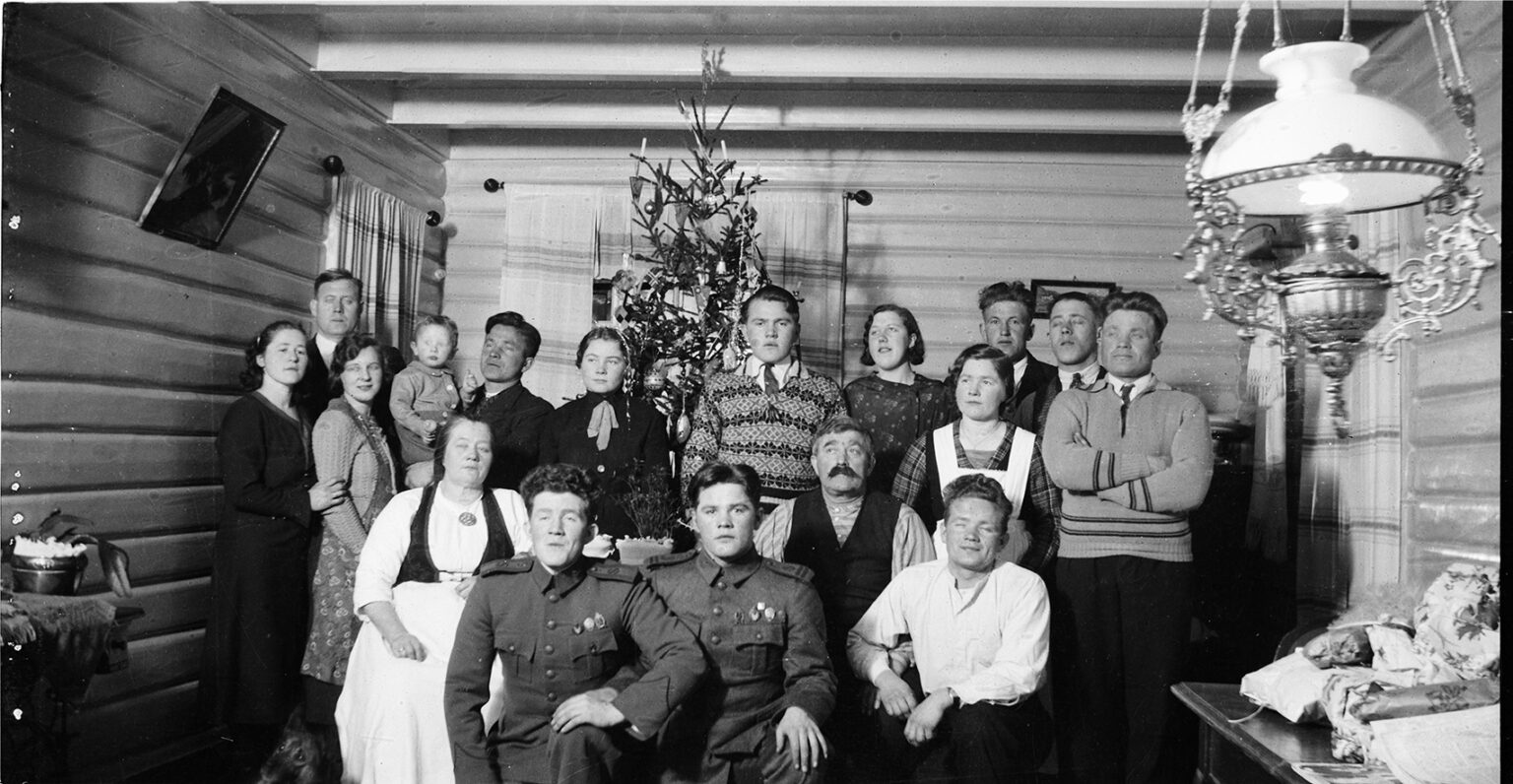 20th century: towards our own time

Central to his life's work was the paternal inheritance on Straand, which he had skillfully passed on and which he passed on to the third generation by his son Sigmund, who together with his wife, Jorunn, took over the operation in 1948. As a natural consequence of the development on Straand, Sigmund during the war on education at the hotel vocational school. It was with enthusiasm and energy that he embarked on the task of leading two previous generations of life's work further into the new era of nascent mass tourism in the early 1950s.
Unfortunately, Sigmund's working day was to be so much too short, when he was abruptly torn away in the middle of his busy working day in 1960, just twelve years after he had taken over the business. By then, however, his son, Johan, had already decided to carry on the family traditions, even though he was quite young at the time.
After taking the hotel vocational school and gaining experience, among other things. from Park Hotell in Sandefjord, he then took over and bought Straand Hotell from his mother in 1973. Since 1973, the hotel has developed rapidly, and today it is one of Telemark's largest and best hotels.

After several expansions in the 70s and 80s and further into the 21st century, the hotel today has 125 rooms, a large restaurant, dance bar, pub, piano bar, swimming pool, gym, lounges, wine cellar and not least a large and well-equipped conference department. . Vrådal Hotel eventually became part of Straand and new self-catering cabins were built. A few years ago, Vrådal Hotel was converted into holiday apartments. Vrådal Booking became a reality, and in this company Straand provides cabins, apartments and services to those who want self-catering. Johan has also developed the beach area down by lake Nisser, where there is an outdoor restaurant and the venerable veteran boat M / S Fram from 1909. In good entrepreneurial spirit, much has been done in Johan's time to further develop Vrådal as a tourist destination. After three years at the Norwegian Hotel College in Stavanger, and several years of practice at various hotels within the Choice chain, in 2008 Johan's eldest son, Sigmund, joined the company. Sigmund and Elin hosted Straand until 2019 when Sigmund wanted to do something else.

In the summer of 2019, Johan's youngest son, Lars Arne, and Katrine moved home to Vrådal to take over the operation of the "country store" Straand. Until then, Lars Arne had worked in technology, strategy, system development and project management in the consulting company Accenture. Katrine Samdal Straand, who is from Bergen, comes from the position Head of Marketing and Sales, Construction & Real Estate, Oslo in Multiconsult Norway. Both are looking forward to seizing this opportunity to manage and further develop the historic family group so that Straand and Telemark's cultural heritage will be taken care of in a good way in the future.

"Vrådal is a unique holiday destination, both summer and winter, with elements from the past, present and future" 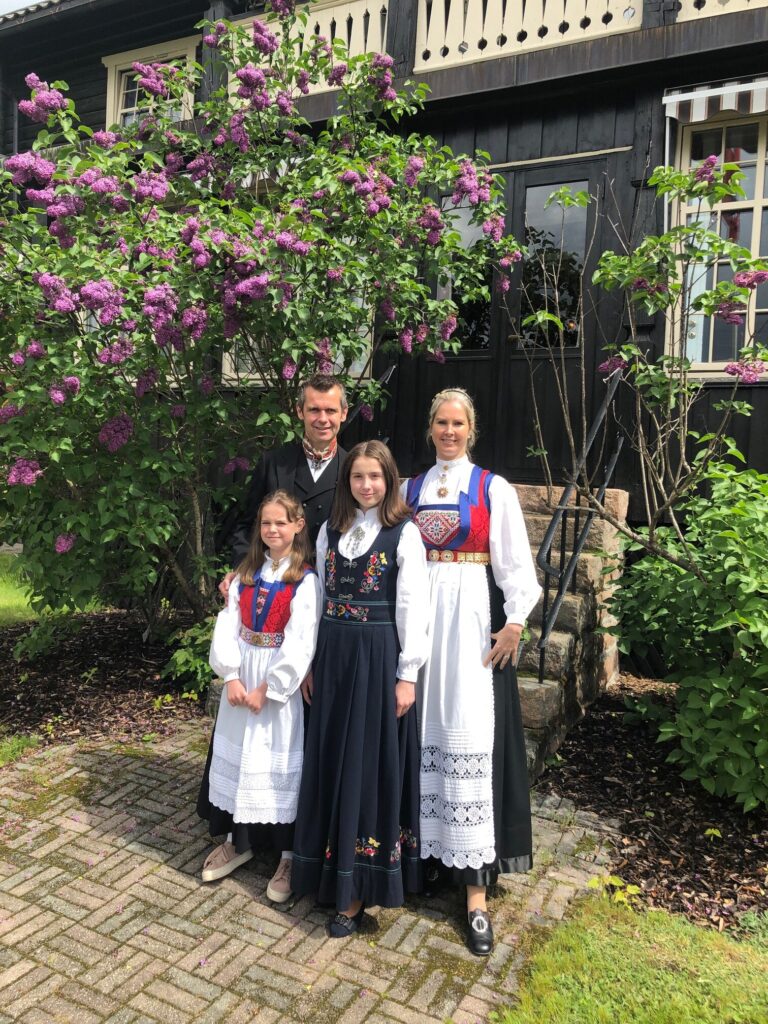